In this electronic world why not have an electronic library to browse? All these are books and films that I’ve read or watched, enjoyed and been inspired by.

Again, just like the gear- if you buy through the links I get a kick-back! 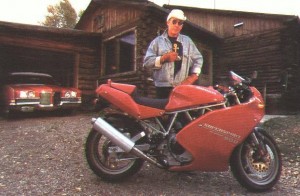 ‘Buy the ticket, take the ride.’

‘I wouldn’t advocate the use of drugs, alcohol, violence and insanity to anyone, but they’ve always worked for me.’

The original (and best?) hard-living ‘adventure’ writer and a personal favourite. He pioneered ‘gonzo’ journalism whereby the reporter is an integral part of the story and thinking about it now, blogging is exactly that.

He wrote brilliantly and lived hard for over half a centuary, shot himself (euthanasia?) and had his ashes fired into the air by a giant fist-shaped cannon high over his Rocky Mountain home, part funded by Johnny Depp. Beat that.

Fear & Loathing in Las Vegas: A Savage Journey to the Heart of the American Dream

By far his most famous outing, largely due to the ‘90s film starring Johnny Depp and Benicio Del Toro. The film is good and fun but doesn’t necessarily do the writing full justice- if you’ve seen it now it’s time to read it.

It’s just Hunter, usually a fairly serious journalist, cutting loose and messing around with his writing and the result is excellent- page-turning, funny, punchy, inspirational and light- the perfect back-pack read.

Kingdom of Fear: Lothesome Secrets of a Star-crossed Child in the Final Days for the American Century

Despite all his gonzo work being by nature loosely autobiographical this is as close as we get to a true, coherent autobiography. And it’s not particularly close. It’s more a cobbled together medley of interwoven tales, illustrating parts of his life with half an eye on a timeline. Still, a cracking read and far more representative of the man I’d imagine than a ‘this, then this’ historical account.

The Curse of Lono

A big, beautiful, coffee-table book for real fans. More hilarious mucking around with words and tales, this time of Hawaii in the 80s, but embellished on a grand scale by his long time illustrator and close friend Ralph Steadman.

Anna got me this for my birthday last year and I was blown away- it’s not cheap but it’s a wonderful luxury-read to keep and cherish.

His first book and one of his finest. Brilliantly written, journalistically rigorous, action-packed and frankly a bit scary. Think living with a tribe of Indians is tough? Try running with the Hell’s Angels in the 50s and writing a book about it!

To his eternal credit he spent the proceeds on a Vincent Black Shadow motorcycle- the fastest production bike in the world at the time and still and icon today.

Hunter’s only true novel, written early in his career. I loved it when I first read it ten years ago, and it’s a good page-turner, but have re-read it more recently and haven’t been so taken. Have a go and see what you think.

The 50s book that sold a million backpacks. If you love travelling in search of ‘something more’ this book will resonate from the first page. It’s packed with child-like wonder, innocence and enthusiasm. I haven’t always got on with Kerouac but I loved this book.

A good book but best avoided, unless maybe things aren’t going right and you need to seek solace in knowing that it’s not just you who can be down. It’s a devastating book-end to the Dharma Bums- at the other end of his career and life the fruits of youth have rotted. Along with ‘Into the Wild’ (below) it will test your outlook. It doesn’t help to learn that in real life Kerouac drank himself to death.

His most famous book and now a film. I found it a bit wordy and ponderous myself but it’s probably due a re-reading.

One Flew Over the Cuckoo’s Nest

This is the book that changed it all for me- a fast-moving tale of adventures on the contemporary backpacking trail of the 90s. I still remember finding it at a school jumble sale when I was 16, devouring it in a couple of days and itching to live it. I’ve had my chance over the years, and it still rings true and is still a riveting beach read.

A funny yet eventually moving film about a fictional, hard-partying DJ in Ibiza. Love it for the laughs, the soundtrack, the Ibiza setting, DJ cameos and the coke badger(?!?)

Anna and I settled in for a quiet night on my birthday last year (getting old!) but put this on… quarter of an hour after it ended we were bagging up Jaegamaester and Red Bull at the corner shop and half an hour after that we were in Ministry of Sound having a proper birthday! Inspiration indeed.

Based on a million true stories; it’s not a documentary about clubbing in the late 90s but it may as well be. Again- funny, inspiring, great soundtrack.

A couple scratching their itchy feet and sharing the results.

Save up for your life-long adventures with EZ ISA
Warning: preg_match(): Compilation failed: invalid range in character class at offset 11 in /homepages/25/d378962294/htdocs/app542129630/wp-content/plugins/wysija-newsletters/helpers/render_engine.php on line 526